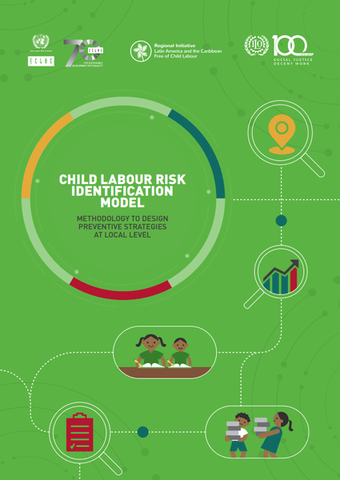 The Latin America and Caribbean region has seen one of the greatest decreases in child labour, from having 20 million child and adolescent workers in 2000 to 10.5 million in 2016. Even so, to achieve Target 8.7 on time and sustainably by 2025, there is an urgent need to create policies that have a direct impact on those that are most vulnerable to this reality and that don’t leave anyone behind.

With this in mind, countries in the region have come to realize the need to re-evaluate the policies that have been effective up to this point and develop innovative solutions that strengthen a preventive approach. “Turning off the tap” of child labour requires getting ahead of the problem, but one of the main obstacles has been the shortage of data to better understand the specific situation of those most vulnerable to child labour.

To find effective ways to eradicate child labour, we need to understand:

In this context, with support from the International Labour Organization (ILO) and the Economic Commission for Latin America and the Caribbean (ECLAC), the Latin America and the Caribbean Free of Child Labour Regional Initiative has developed the Child Labour Risk Identification Model. This statistical tool uses existing country data—surveys, censuses and administrative records—to identify and classify territories according to their probability of child labour in order to determine where preventive efforts should be prioritized. It also identifies the factors that have a greater impact on a region’s vulnerability to child labour in order to improve existing cross-sectional actions.

This model is an innovative and cost-effective strategy that provides countries with reliable information and helps to make government action and contributions from social partners more efficient. With systematically organized information, countries can promote and strengthen policy dialogue and coordination at the local level to design targeted preventive responses and disrupt the course of child labour, make progress towards national objectives and achieve Target 8.7.

In order to implement the model, two different kinds of information sources were needed: one that estimates the child labour rate on a national level and allows countries to build a logistics model, such as child labour surveys, and a second that would facilitate the level of disaggregation and provide sufficient information to replicate the model on a sub-national level, such as population censuses.

Some of the variables used by the countries to identify the factors associated with child labour were sex, age, residential area, ethnicity, race, migrant status, educational attendance, household size, educational background and parents’ occupation, among others. It is important to mention that each country chose variables to include in the model based on previously conducted national studies and, once identified, confirmed if these could be combined with the surveys and censuses used.

In accordance with what was analysed by the Risk Identification Model, the region should further focus its interventions on rural and environmentally fragile areas affected by natural disasters or conditions of insecurity, at-risk sectors such the agriculture and the services sector; and where there are at-risks groups, such as indigenous people, communities of African descent and migrants.

Accordingly, in 2019, the pilot countries hope to start the second phase of the model. Tuxtla Gutiérrez, the capital city of Chiapas, Mexico, will be the first municipality to carry out the implementation of the model. This city was the first to accept the voluntary commitment to further examine the local situation of child labour. With the second phase in motion, Tuxtla Gutiérrez aims to identify, design and/or adjust multisectoral interventions on the local level, or strengthen components of already existing instruments, to reinforce local preventive and protective services.

The Child Labour Risk Identification Model will next be implemented in Chile, Costa Rica, Guatemala, Jamaica and the Dominican Republic, and it is expected that more countries will join in soon.

In this framework, the Regional Initiative offers an important example of how actors can be incentivized to find better alternatives and tools for achieving Target 8.7, and offers such a tool in the Risk Identification Model. Only through such innovative responses can we hope to accelerate the reduction of child labour and prevent it from happening in the future.