Countries of Latin America and the Caribbean joined and reaffirmed their commitment for action at the global level to achieve target 8.7 of the 2030 Agenda.

The great global mobilization to end child labour in 2025 "Act, inspire and escalate" has begun 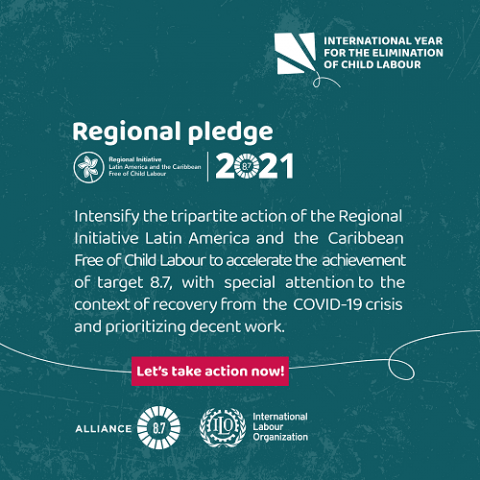 Leaders and representatives from around the world gathered virtually at the global launch event for the International Year for the Elimination of Child Labour 2021, chaired by Guy Ryder, Director General of the International Labour Organization (ILO); Henrietta Fore, Executive Director of UNICEF; Kailash Satyarthi, Nobel Peace Prize; and Amar Lal, activist and former child worker. Countries and governments, as well as institutions and organizations at all levels and sectors, reaffirmed their commitment and willingness to act to advance towards the achievement of target 8.7 of the 2030 Agenda, which calls for ending child labour by 2025.

In this way, 2021 begins with an important global mobilization that focuses on the protection of the rights of children and adolescents around the world from the consequences of child and adolescent labour, especially in its worst forms. A reality that affects 152 million minors worldwide -10.5 million in Latin America and the Caribbean- and that, due to the current health and economic crisis, could intensify, putting at risk the important advances of the last decades.

During the opening event, expectations and plans from different parts of the world were shared to "Act, Inspire and Escalate", pillars of the International Year 2021 to make visible, engage and promote the action of more and different actors. Along these lines, the event expanded the urgent call to define Action Pledges 2021 that contribute to ending child labour and that can be achieved by December of this year. Some examples of Commitments of Action are the allocation of budgets, the formulation and approval of laws, the improvement of social protection, among other necessary and achievable measures, which will allow giving an impetus towards the V Global Conference on the Sustained Eradication of Child Labour, which will be hosted by the Government of South Africa in 2022.

For the Regional Initiative and its members, it is a priority to ensure the adequate growth and development of childhood and adolescence, especially now that children and adolescents must be at the centre of the priorities for action in response to and recovery from crises. For this, it is important to highlight that, en route to target 8.7, Latin America and the Caribbean have been implementing effective actions together with their development partners for several years.

The sustained commitment of the Andalusian Agency for International Development Cooperation (AACID), the Brazilian Agency for Cooperation (ABC), the Spanish Agency for International Development Cooperation (AECID) and the United States Department of Labor (USDOL), has played a fundamental role in intensifying the prevention and elimination of child labour in the region, going from 14 million children and adolescents in child labour in 2008 to 10.5 million in 2016. Thanks to this continued support, Latin America and the Caribbean has positioned itself as the region with the greatest possibility of reaching target 8.7.

In this framework, it should be noted that the proposed declaration of the International Year for the Elimination of Child Labour 2021 was an initiative and commitment assumed by the Regional Group of Latin America and the Caribbean (GRULAC) during the IV World Conference on the Sustained Eradication of Child Labour (Argentina, 2017). Its global approval, sponsored by 78 Member States of the United Nations, was held during an event organized by the International Labour Organization (ILO) and Alliance 8.7, within the framework of the High-Level Political Forum on Sustainable Development in 2019.

You can watch the recording of the event here.

For further information, visit the official website of the International Year for the Elimination of Child Labour 2021: www.endchildlabour2021.org