The Regional launch of the International Year for the Elimination of Child Labour convened Presidents, tripartite and civil society representatives. More than 10 million boys, girls and adolescents work in Latin America and the Caribbean, and the situation worsens due to COVID-19.

ILO: In 2021 it is time to ¨move up a gear” against child labour in Latin America and the Caribbean 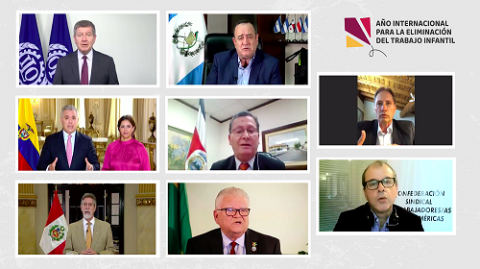 Lima – The launch of the International Year for the Elimination of Child Labour in Latin America and the Caribbean, which allowed the ILO to convene today Presidents, governments, employers, workers, civil society and region personalities, showed that there is consensus around the need to double efforts in order to avoid that the COVID-19 crisis becomes a setback in the progress achieved.

“This International year is not about talking, it is about doing” said Guy Ryder, General Director  of the ILO, in his message to this regional gathering.  “We ask everyone to commit themselves so we have more possibilities to achieve our ambitious goal of the Sustainable Development Goals (SDGs): to eliminate child labour by 2025”.

The launch this Wednesday included messages from the presidents Ivan Duque of Colombia, Alejandro Giammattei of Guatemala and Francisco Sagasti of Peru, as well as the vice president of Costa Rica, Marvin Rodriguez and the Minister of Labour and Social Security of Jamaica,  Karl Samuda.

The ILO has reported that in the past 25 years, Latin America and the Caribbean made significant progress as 9,5 million boys, girls and adolescents stopped working, especially in hazardous activities.  However, before the pandemic there were still 10,5 million in child labour.

The situation may worsen due to the crisis generated by COVID-19.  Guy Ryder stated that “poverty increase and the fall of family income, schools’ closures and the increase of vulnerabilities, are factors that may contribute to increase child labour”.

According to ILO and ECLAC estimates, published in June 2020, up to 3000.000 boys and girls could go back to child labour situation due to the crisis impact.

“In view of the resurgence of the health emergency, the extension of special measures of lockdown and distancing, and the persistence of the crisis in recent months, this situation is worsening”, said the ILO Director for Latin America and the Caribbean, Vinicius Pinheiro, at the beginning of the session.

It is time to “move up a gear” in the fight against child labour, to continue advancing and facing a crisis that “could take us backwards in one year the equivalent to a decade of progress”, said Pinheiro.

The president of Colombia, Ivan Duque, stated that the commitment is to prevent and continue decreasing child labour in society, in a video message together with the first lady Juliana Ruiz. He highlighted the need to double efforts and warned that “this is vital now that we are facing the COVID-19 challenges”.

The president of  Guatemala, Alejandro Giammattei, highlighted the political commitment “at the highest level” to the prevention and eradication of child labour in all its forms during the launch of the International Year.  “We join this global initiative to strengthen efforts to fight against this scourge”.

Francisco Sagasti, President of Peru, linked the persistence of child labour, a problem and tragedy that afflicts the entire world, to the “endemic inequality in our region” and he reiterated the commitment of his country to the application of strategies to face this problem.

The three presidents highlighted the Regional Initiative Latin America and the Caribbean Free of Child Labour, a tripartite platform that since its creation in 2014, has devoted to search for new answers to the emerging faces of child labour, with the participation of 30 countries within the region, 7 employers’ organizations and 7 workers’ organizations.

The Nobel Peace Prize, Kailash Satyarthi, an international fighter against child labour who was connected to the regional launch, reminded us that “we know about the problem, we know what are the solutions, we have technology” to face the problem, and he considered that the International Year should result in concrete progress.

The idea to commemorate the International Year came up at the Fourth Global Conference on the Sustained Eradication of Child Labour, held in Buenos Aires in 2017.  Two years later, and thanks to the active work of the Argentine Chancellery, during the 73rd. General Assembly of the United Nations, in July 2019, 78 countries supported the Resolution to declare 2021 as the International Year for the Elimination of Child Labour.

At the regional level commemoration, the ILO stated that it will be necessary to work on  joint actions, increasingly more efficient, based on social dialogue and getting together all the public and private actors that have part of the response to the persistence of child labour.

During the launch, the participation of the Peruvian activist and former child worker Sofia Mauricio, was particularly moving.  “When I was 12 years old I became a child nanny… My story is not only mine.  In the movements for the fight against child labour I  have seen that this situation repeats itself  in millions of boys and girls¨.

“I call the governments to establish policies for the eradication and prevention of child labour, that guarantee the protection of vulnerable people and ensure quality education¨, she added.

Pinheiro stated to the wide audience gathered for this launch in virtual platforms, that ¨we are facing a multi-causal problem that needs responses of economic, social, political and also cultural nature, to change the patterns that perpetuate visions and perceptions on childhood and adolescence, which limit their potential and their ability to project their future¨.

“We are aware of the problem; we know what works to solve it. It is time to act decisively, with sufficient policies and budgets to preserve what we have achieved instead of setting back, moving on in the goal to eradicate child labour”.

“Looking at this problem, indifference is a way of complicity” said Pinheiro at the end of the launch of the International Year for the Elimination of Child Labour in Latin America and the Caribbean.

Note: if you wish to listen to all the participations of this launch, you may listen to the video recording available here.