How to prevent child labour in the region in times of COVID-19? 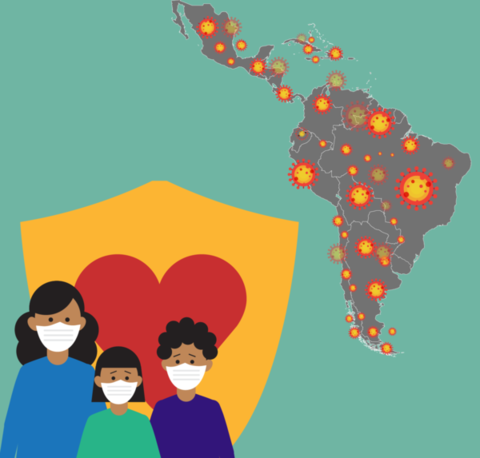 In March 2020, the World Health Organization (WHO) classified the COVID-19 outbreak as a pandemic. To date, the governments of Latin America and the Caribbean have been implementing a series of measures to cope with the rapid spread of the virus among the population, as well as formulating and redesigning responses to reduce the economic and social impact on families.

The labour world is one of the most affected. Many companies and jobs are at risk. Vulnerable groups such as people in informal jobs or women in precarious jobs must be at the centre of the political response. However, it is key not to leave children and adolescents behind because the environment in which they grow has been altered; therefore, their development is also at risk.

According to ECLAC, children and adolescents from vulnerable families affected by the pandemic could advance their entry into the labour world and, in addition, do so in precarious and unsafe conditions. This would increase child labour rates in the region.

In the case of adolescents who managed to insert themselves into protected jobs, the current emergency situation may increase their vulnerability to unsafe and informal jobs. Even for those who were already in child labour, the precarious and hazardous work situation could worsen.

The countries of the region are alert. Argentina, Brazil, Guatemala, Panama and Peru are redoubling efforts to prevent the increase in child labour rates because of COVID-19.

In Argentina, measures are being implemented to strengthen and protect the most vulnerable families. These measures are also aligned with the National Plan for the Prevention and Eradication of Child Labour and Protection of Adolescent Labour 2018-2022. In this sense, the measures include families with at least one minor who carries out a productive activity or more than one, who also live in rural areas and in the regions with the highest incidence of child labour.

Additionally, the Ministry of Labour, Employment and Social Security of Argentina will train 26 territorial agents from 16 provinces, 8 coordinators of Provincial Commissions for the Eradication of Child Labour and representatives of the union sector, on how COVID-19 affects child and adolescent labour by increasing the vulnerability of the family nucleus.

In Brazil, as part of emergency protection measures, the number of people benefiting from social programs has increased. The “Bolsa Familia” Program has increased the amount of the monthly transfers, especially for families with working children and adolescents. In addition, the Ministry of Citizenship works to adapt the Child Labour Prevention and Eradication Program to the current situation of the pandemic, emphasizing domestic child labour and intensive tasks in the home itself, since these situations can be aggravated due to the Isolation measures and as a strategy so that more adults in the family can work.

In order to protect permitted adolescent work, Brazil has included child labour as an urgent control category. Adolescents are not allowed to continue working face-to-face and the Federal Government has issued measures to protect the employment and income of this group, such as moving forward vacations, working from home, the suspension of contracts and the proportional reduction of hours and wages with the supplementary payment of a government bonus for each job.

As for Guatemala, the coffee sector, the Coffee Foundation for Rural Development (Funcafé), which since before the pandemic ran educational and awareness programs against child labour, has managed to adapt its services to social distancing measures and help children and adolescents from coffee families continue to receive education. In addition, in the case of boys and girls between 5 to 6 years-old, it also offers food and nutrition services. In this way, educational and food services prevent child labour in families.

In Panama, the Ministry of Labour and Labour Development has reinforced its efforts to provide support to the most vulnerable families, including those who have sons and daughters in child labour. Emphasis is placed on continuing to strengthen the capacities of local governments, which already had a digital platform for monitoring child labour that allows online assistance to cases.

In Peru, the National Steering Committee for the Prevention and Eradication of Child Labour (CPETI) has made a diagnosis based on the results of the application of the Child Labour Risk Identification Model applied in the country. Consequently, it decided to continue with strategies laid out before the pandemic, such as focused action, strengthening inter-sectoral work, strengthening interventions for children and adolescents from a rights perspective, as well as maintaining support for productive chains without child labour.

These are some of the responses that are being coordinated and implemented in this context. In turn, the region is planning, now more than ever, to broaden the scope of the call to end child labour and continue efforts to advance in achieving target 8.7 of the 2030 Agenda.

Thus, the countries, workers' and employers' organizations, members of the of the Regional Initiative Latin America and the Caribbean Free of Child Labour, unite to commemorate this June 12 the World Day against Child Labour under the motto "Now more than ever #Without Child Labour".