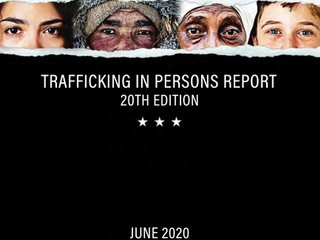 Today we commemorate the World Day Against Human Trafficking in the context of the global health crisis.

The economic and social impact of the COVID-19 disease is causing people who were in a vulnerable situation before the crisis to be even more so. One of the dangers they will be most exposed to is human trafficking; Therefore, it is important that the countries of the region remain alert and continue working to improve their actions against this crime, especially now that it has become more difficult to provide and access care and protection services.

Against this background, reports such as the one prepared by the United States on human trafficking worldwide are opportune to analyze in order to promote the evaluation of better national and regional responses. Since 2000, the US government has documented the efforts and progress of countries to convict, protect victims, and prevent human trafficking.

This year, of the 29 countries in Latin America and the Caribbean that appear on its classified list, only Argentina, Bahamas, Chile and Colombia are positioned at level 1, which means that these governments comply with the minimum standards of the Law of protection of victims of trafficking and violence from the United States and the United Nations Protocol to Prevent, Suppress and Punish Trafficking in Persons. However, despite the fact that this level represents a better position, it does not mean that national actions are sufficient, since there are still cases of human trafficking in their territories.

In this report, it is mentioned that in all the countries of the region there are cases of trafficking in women, men and children and adolescents. The victims are both nationals and foreigners, documented or undocumented immigrants, and indigenous people.

Among the reasons are sex trafficking, in bars and brothels; forced labor, in different sectors such as clothing, agriculture, street vending, coal and brick production, and domestic work; also, for the transport of drugs and other illicit activities. Among the cases, it was even identified that relatives or caregivers of children are the ones who promote these crimes.

The report also mentions that immigrant children and adolescents who are in protection centers are at potential risk of abuse and trafficking, as some traffickers recruit them while in such centers. There were also cases in which police officers were in complicity with human traffickers, but received administrative sanctions instead of being tried.

Faced with this situation, the United States government emphasizes the need to improve and toughen sentences for human traffickers, expand efforts to identify and protect victims of trafficking, as well as ensure that they are not judged for their actions. crimes that they committed forced and pressured by their traffickers.

The countries in the region that are at level 2, that do not fully comply with the standards of the law or the protocol, but that are making efforts to achieve it, are Antigua and Barbuda, Bolivia, Brazil, Costa Rica, Ecuador, El Salvador, Guatemala, Haiti, Honduras, Jamaica, Mexico, Panama, Paraguay, Peru, Saint Lucia, Saint Vincent and the Grenadines, Suriname, Trinidad and Tobago, and Uruguay.

The countries that are in level 2 "Watch list" are those that, in addition to having the level 2 profile, have an estimated number of victims that is significant or that is increasing, and where actions are not being taken proportional to this, or where there is insufficient evidence of efforts for previous years. For this group, the countries of the region are Barbados, Belize and the Dominican Republic.

As for level 3 and last, it is made up of countries whose governments do not fully comply with the minimum standards of the law and are not making significant efforts to achieve it. Cuba, Nicaragua and Venezuela would belong to this group. 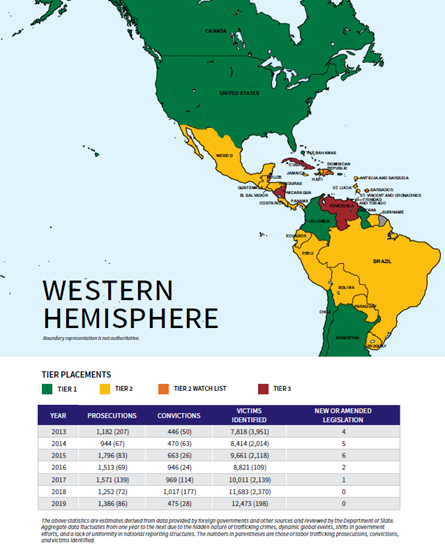 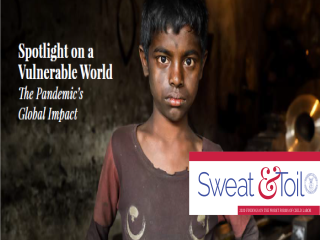 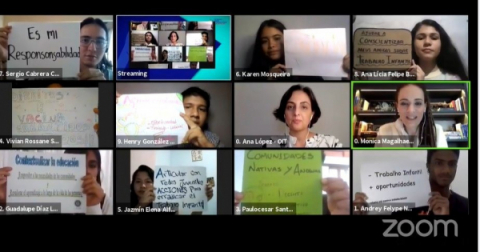